On February 24, Russian Military forces were directed to invade Ukraine. This ongoing military mobilization could probably be considered the largest military attack after the Second World War in the European land. Despite an informed and connected world order, the brutality of war has altered the peace process with narrow national interests.

Since the very first day of the war, the world government, especially UNO, has been trying to nullify the Russian military presence; however, the approach of Russia towards Ukraine is more radical and conventional. Having been discussed on the matter by both Russia’s Putin and Ukraine’s Zelensky, the possibility of de-escalation seems to be untouched. The external pressure on Russia to withdraw its military would be a tough assignment for the world leaders. But, the recent diplomatic gain of India, on the matter of the Ukrainian crisis, could not have been simplified if the invasion did not take place. At this juncture, India’s foremost priority will be to tackle the national interest without caring for a better humane world. Preferably, the military attack on Ukraine might degrade Russia’s geopolitical standard, but the diplomatic discretion of India would promote an old strategy in a lucrative manner with the current diagnosis.

Old is Gold: A Nehruvian Position

The immediate result of India’s independence had an effect on its people somewhat on world politics, unfolding a new chapter to solve the arithmetic of Third World nations with some controversial but constructive visions. In general, developing countries were convinced to give up their ideological favouritism in a divided world of Capitalists and Communists. With the help of other leading leaders of the Asian continent, Pandit Nehru paved the middle path as a golden means to attain the peak of development without the fear of ideological misuses. This formation helped India to be equidistant from power games played by superpower nations yet take benefit for both sides for her needs in agriculture, education, military, and food grains1. With a solid response to the ideological equation, Pandit Nehru was convinced, along with the other leaders of South Asia, to maintain a neutral position for reconstructing India in all its efforts. Still, the matter of ideological alienation debars India from taking an unbridled stand in favour of any Super Powers; however, in the context of the Ukrainian crisis, the reluctance of India to defame the Russian position has been widely misunderstood at the global level. The permanent representative of India to the UN, Sri Tirumurti, with the pursuance of India’s position, refused to participate in the voting and abstained India in all the times; moreover, India could not maintain its position due to the age-old friendship with Russia and economic and strategic ties with the USA. India was expected to sideline its friendship with Russia on the matter of invasion, but New Delhi had approached silence on the matter to claim the unbroken friendship for Russia on the one hand and national interests on the other. The totality of invasion and India’s insight over the circumstances impose the relevance of Nehru’s efforts to nurture India as a follower of autonomy rather than to take rest in any ideological camps.

One of the most enduring outcomes of the Ukrainian crisis is to acknowledge the importance of National Interest. In International Relations, realism has been widely accepted as the most exemplary theoretical construct to deal with world governments and countries in particular without sacrificing the sovereign power. National interests, especially in times of war, lead the state to speak and act with one voice2.

Despite a strong military apparatus and request from the President of Ukraine, NATO allies were delayed to deploy their military personnel; but the economic sanctions were imposed in all quarters to restrict the trade and strategic expansion of Russia. Due to the heavy pressure from Russia and warnings for nuclear explosion and strong retaliation, all the great powers left no stone unturned to detach themselves from the Ukrainian crisis directly. Likewise, India has placed herself within a serious dilemma to counter the hazardous situation; nothing makes higher priority for India except to evacuate the Indian nationals from Ukraine in a safety mode through Mission Ganga of the Indian Air Force. Former Indian Ambassador to Canada, Sri Vishnu Prakash, claimed that “India’s stand over Russia-Ukraine crisis consistent with its national interests” he also added that “I think India has taken a stand which is consistent and in keeping with our national interests. Every country does so, and so we are. We have an iportant relationship with Russia. We have a very important relationship with the US.” India would not intend to revive its history of generosity as it has done in the past decades, for instance, in the formation of Bangladesh and deployment of the Peacekeeping force in Sri Lanka. Both the events, more or less, produced several unavoidable situations, and mainly, the then Prime Minister Mr. Rajiv Gandhi was killed for the Sri Lanka issue. Our core values and national interests leave us no choice but to take on two tech powers at the same time3.

The global power axis has today shifted away from the Pacific-Atlantic region to the Indo-Pacific region4. With the demise of the US military set up in Afghanistan, the world is now under the grace of the Asian continent, ranging from trade and commerce to tourism and diaspora; both India and China have attracted the world community. India’s stand of Ukraine has produced positive energy to deal with world affairs. At the beginning of the Russian-Ukraine war, many countries were raised voices for the intervention of India on the matter because of the Russia-Indian diplomatic obduracy. Before the Ukraine crisis, India had played a great role in Afghanistan on human rights and food security. Recently, the Indian Prime Minister’s visit to the USA transformed the Indo-Pacific diplomacy to detain Chinese expansion; moreover, Putin’s recent trip to India revived its strategic position as it was started from the Indira Period. In the overall assessment, India has scored better to penetrate its voices and demands at the global stage. India’s diplomatic position on the ongoing crisis might disturb the Western allies, but the totality of the situation would preserve the geopolitical interest of India.

On the Ukraine crisis, India maintained a balanced approach at the UN to tackle the catastrophic problem. Sanjay Kumar Pandey, a professor of Russian and Central Studies at Jawaharlal Nehru University, defined the entire situation as “India has been trying to do this balancing act” in The National. New Delhi has abstained on all the five West-sponsored resolutions against Russia on Ukraine in the UN that condemned Moscow’s military offensive on the East European neighbour since February 245. India’s silence in UN has clarified that any anti-Russian stand might strengthen the Sino-Russian ties for which India would be placed in a vicious circle; moreover, India, as of now, could not be caught off her strategic domination in the Indo-Pacific as a result of India’s clear stand on Ukraine conflict. The Russian embassy tweeted that “Highly appreciate India’s independent and balanced position at the voting in the UNSC on February 25, 2022”. The diplomatic victory for India in the UN maintains a “Balancing Narrative” to deal with the superpowers.

Russia-Ukraine conflict demarcates the line of choice for India in global politics. India has not supported Russia’s aggression tacitly or otherwise but is has consciously refrained from publicly condemning it6. Both countries have had friendly relations since the formation of the Soviet Union; following the path of planned development, India had adopted the Soviet economic model to recover its economic paralysis. The historic economic partnership is mirrored by long-standing political collaboration between the two countries7. The bilateral ties between the two countries have been proved in several issues such as Russia’s vote on Kashmir in UNSC, supply of military equipment to India, and strategic deterrence of India with Pakistan and China. However, India’s stance towards Russia on the Ukraine crisis is not new. Even in 2014, when Russia annexed Crimea, India had maintained neutrality at the UN8. For the fiscal year 2021-22, the bilateral trade between the two countries stands at 9.4 billion dollars compared to China and Russia. It was far higher. India is always dependent on Russian military supply; around 85% of India’s military weapons come from Moscow.

Along with the trade and strategic ties, India-Russian relations have many challenges to be resolved; the dissatisfaction of Russia over the countries those who were voted against Russian invasion made Russia place them in the list of “Unfriendly Nations.” The historical ties and strategic engagements have prevented India from taking a distinct position on Ukraine. Rajeswari Pillai Rajagopalan, Director of the Centre for Security, Strategy, and Technology at the Observer Research Foundation in New Delhi, argued that “India does not want to be solely dependent on the US and the West,” which indicate the closeness of the India-Russian partnership. Paradoxically, the Ukraine issue would be able to alter the image of Russia in several quarters of the world, but India’s approach towards Russia will definitely achieve the height of mutual understanding and cooperation. One more thing, India’s vision for a cooperative world could only be possible when the Russia-Indian-China triangle meets to disseminate Asian values with Europeans and Americans.

The rising importance of India at the global level defines our diplomatic endeavours, bilateral relations, and firm conviction towards non-alignment. Earlier, the policy of non-alignment was criticized in the very quarter to meet the demands of the complex, interdependent world. But, the slight “tilt” of New Delhi towards Moscow has been widely viewed as India’s strategic concerns and geopolitical expectation in the Indo-Pacific. It is seen as impossible for New Delhi to break the historical ties with Russia by placing herself on the rival side; moreover, the diplomatic caricature of India has been expected to cement the Indo-China relations as the result of the Ukraine conflict. Despite criticism, India has won the heart of a trusted friend for whom India will be raised as a dominant player in Asia and the World as a whole. 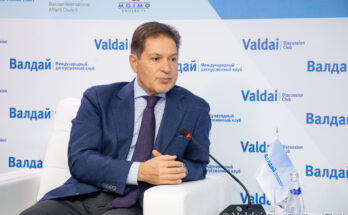