THE CLOCK STRIKES 7:00 P.M, as the regular Twitter user, logs into his account. Presented before him on his feed, a surfeit of tweets that speak of why veganism is the healthiest choice, how socialism is the way forward, and what couture dress Lady Gaga donned at her birthday party. Exhausted and drained from work, he makes the most suitable choice for himself and decides to scroll through his whole feed. He skims through each tweet and all the comments. He is agitated because of how people think a vegan diet is a complete diet, socialism is the way forward and the couture dress Lady Gaga wore looked any good.

Media has always been an integral part of our lives. It acts as a vital socializing agent and an effective communication tool. Since time immemorial, it has shaped nationalist revolutions, propagated scientific ideas, and raised socio-cultural issues.

The most recent development in the sphere of media is social media. A powerful tool that transcends physical copies, textbooks, and printing and makes its way even more intrusively into the lives of those using it. It has been widely debated if social media is a boon or a bane. A magical invention that unites humankind, or a mere tool for spreading hate and fabricated information. While answers such as these can never be simply black or white, it isn’t incorrect to say social media has presented us with novel social issues. This article will be based on the ways social media negatively impacts mental health.

Circling back to the story we set off from, one can notice how an individual is bombarded with information at the click of a button. Such a situation clearly creates the possibility of an information overload.

An information overload occurs when a person is exposed to information beyond their processing capabilities. Often this represents an overwhelming situation. This may lead individuals to neglect the care of their own selves and prioritise their digital reality that often reflects issues disproportionately. Furthermore, being confronted by a multitude of voices and facts at the ‘ting’ of a notification, everything can seem immediate and important, even more so than our present realities.

NOW AT 9:00 PM, he’s a little bored with Twitter. Obviously, he switches to Instagram. Bombarded again with so many selfies, he decides to click one for himself. Extending his arm, he adjusts the camera to face his best side. Snap. A few filters. A little Face-tune. That ought to do it.

2. CRAFTING THE DIGITAL SELF

The digital self is the portrayal of your life on social media. At some point, we have all been guilty of wanting to appear perfect on social media, either through long textual dissections of political issues on Twitter or a simple attempt to modify one’s features for an Instagram post. Social media’s demands are such that one must put up only their most socially desirable selves online. There is constant pressure to stay relevant and live the best life, or at least appear to. This has made humans all the more conscious of themselves. And often they go to great lengths to paint this idealized and socially desirable portrait. From posting the perfect picture to staying politically correct in front of those 100 odd followers, people seek validation at the cost of their own health.

IT’S 10:00 PM AND he’s still on the phone. Another notification, a tweet from his friend that says maybe veganism isn’t so bad. Well, he thinks, they’re all saying so, it has to be true.

Conformity occurs in groups when individuality is compromised or subverted to align oneself with the common view. A sort of trade-off between your beliefs to stay a part of a community. Staying true to yourself is a key component of your mental health. Retaining one’s identity is crucial to their self-image, and it can only be damaging to leave behind your identity for the sake of likes.

Further, the compromising of the innate self often leads to a situation wherein one is stuck between wanting to be someone else and a resentment towards being their own self. And no one really needs more ethical dilemmas in life, right?

HE’S ABOUT TO keep the phone down when he’s met with a rather upsetting notification. A small ting, he expands it to read a comment on his post calling him names. Distressed, he peers into the mirror. Well, he’s not wrong too, he thinks to himself as he analyses his body.

The proliferation of social media makes people find a way to troll and bully each other online too. (1) Cyberbullying is something that very evidently impacts mental health and attacks an individual’s self-worth. 59% of U.S. teens have been bullied or harassed online, and a similar share says it’s a major problem for people their age1. At the same time, teens mostly think teachers, social media companies, and politicians are failing at addressing this issue.

Cyberbullying probably is one of the darkest and most disturbing facets of social media. In fact, it may have grave and lasting consequences on an individual’s life. It is said that victims of cyberbullying are likely to develop low self-esteem and have suicidal thoughts, putting them in a very dangerous situation.

IT IS 1 AM NOW, as he’s scrolling through Instagram, all he sees are perfect bodies and perfect faces, vacations to exotic beaches, and the latest clothing and shoes, a single thought races his mind, Why can’t I have this life?

With others’ lives showcased in front of us, it is hard not to compare and question ourselves. We may be actively aware that we are watching a manufactured version of someone’s life on social media, but still feel negative about it.2 A study at the University of Michigan among 1000 young adults concluded that people who use Facebook are more likely to compare themselves with others. Tendencies such as these are particularly common in young adults, who are subject to a lot of emotional and mental stressors in their life either through their peers, families, etc.

THE CLOCK STRIKES 2 A.M., as he goes to bed. Revolving in his mind are the thoughts: Maybe my life is inadequate, as he tosses. I wish I was on a vacation to Bali, as he turns. As he lays still, he breathes in and sighs, Maybe I am not good enough.

It is not to say that these did not exist before social media, it simply indicates how social media augments these behaviours in a way that they turn out to be detrimental to us. But perhaps, the basis of all these issues is human nature itself. And perhaps life’s ultimate truths are paradoxical.

And obviously, solutions to these issues are not as silly as throwing one’s phone away but maybe sitting down and confronting our own emotions. In some ways, the social media-mental health crisis presents to us the swarm of emotions we have been repressing and it is about time, we stand up to deal with them. 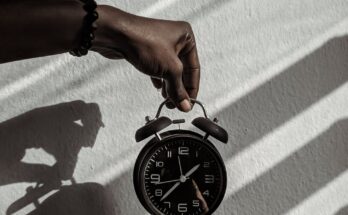 Time is running out

View all posts by Anvii Mishra →